Ground validation (GV) campaigns before and after the launch of NASA’s Global
Precipitation Measurement Mission (GPM) Core satellite in early 2014 have been
planned to collect targeted observations to support precipitation retrieval algorithm
development, to improve the science of precipitation processes, and to demonstrate the
utility of GPM data for operational hydrology and water resources applications. The
Integrated Precipitation and Hydrology Experiment (IPHEx) centered in the Southern
Appalachians and spanning into the Piedmont and Coastal Plain regions of North
Carolina seeks to characterize warm season orographic precipitation regimes, and the
relationship between precipitation regimes and hydrologic processes in regions of
complex terrain.

Since 2007, a high elevation tipping bucket rain gauge network has been in place in the
Pigeon River Basin (PRB) in the Southern Appalachians and intensive observing periods
(IOPs) have been conducted in this and surrounding river basins to characterize ridgeridge
and ridge-valley variability of precipitation using radiosondes, tethersondes, Micro-
Rain Radars (MRRs), automatic weather stations and optical disdrometers. Important
results from these analyses include the importance of light (<3 mm/hr) rainfall as a
baseline freshwater input to the region especially in the cold season, and the high
frequency of heavy rainfall and severe weather in the warm season, and illuminate the
significant spatio-temporal variability of rainfall in this region.

IPHEX will consist of two activities: 1) an extended observing period (EOP) from
October 2013 through October 2014 including a science-grade raingauge network of 60
stations, half of which will be equipped with multiple raingauge platforms, in addition to
the fixed regional observing system; a disdrometer network consisting of twenty separate
clusters; and two mobile profiling facilities including MRRs; and 2) an intense observing
period (IOP) from May–July of 2014 post GPM launch focusing on 4D mapping of
precipitation structure during which NASA’s NPOL S-band scanning dual-polarization
radar, the dual-frequency Ka-Ku, dual polarimetric, Doppler radar (D3R), four additional
MRRs, and two X-band radars (NOAA NOXP, and X-Pol) will be deployed in addition
to the long-term fixed instrumentation. During the IOP, the NASA ER-2 and the UND
Citation aircraft will be used to conduct high altitude and “in the column” measurements.

The ER-2 will be equipped with multi-frequency-radiometers (AMPR and CoSMIR), the
dual-frequency Ka-Ku band, HIWRAP Ka-Ku band, CRS W-band, and EXRAD X-band
radars. The ER-2 instrument complement collectively functions as an expanded GPM
Core “satellite proxy”. The UND Citation instruments will be dedicated to microphysical
characterization. The ground-based instrumentation sites were selected to collect
extensive samples of orographic effects on microphysical properties of precipitation,
specifically DSDs, for the dominant warm season precipitation regimes in the region: 1)
westerly systems including Mesoscale Convective Systems (MCSs) and fronts; 2)
southerly and southeasterly convective systems and tropical storms; and 3) convection
initiation and suppression and feeder-seeder interactions among fog and multilayered
clouds in the inner mountain region. A real-time hydrologic forecasting testbed is
planned to be operational during the IPHEX IOP. In preparation for the forecasting
testbed, a benchmark project for intercomparion of hydrologic models has been
developed (H4SE) in the context of which all data necessary (GIS, atmospheric forcing,
land-surface attributes, soil properties, etc) to implement and operate hydrologic models
in four major SE river basins (the Savannah, the Catawba-Sandee, the Yadkin-Peedee and
the Upper Tennessee) were analyzed and processed at hourly time-step and at 1 km2
resolution over a 5-year period (2007-2012). Data are currently available from
http://iphex.pratt.duke.edu to all participants. The goal of H4SE is to facilitate
implementation of hydrologic models in the IPHEX region to assess the use and improve
the utility of satellite-based Quantitative Precipitation Estimates (QPE) for hydrologic
applications. 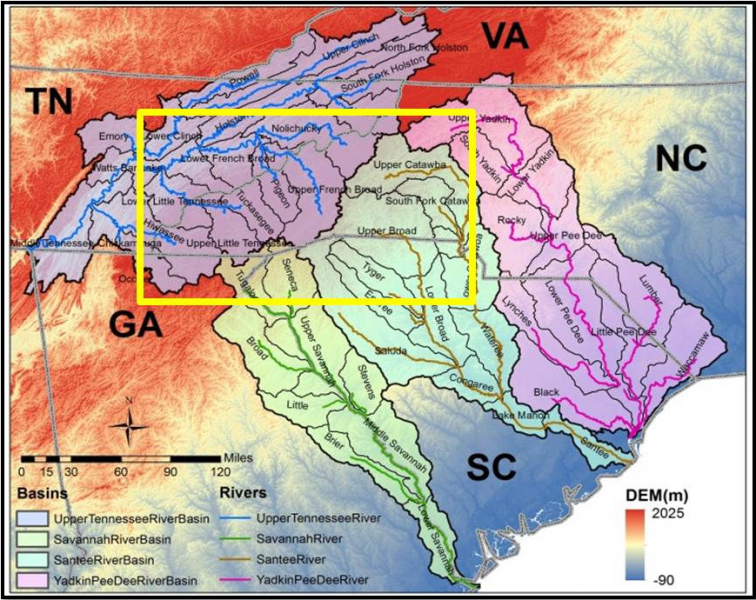