Tropical cyclones (TCs) are well known for hazardous aspects due to the damage and loss of life they cause along their track. Beyond this common association, hurricanes and tropical cyclones provide an important amount of freshwater to the landscape in a short time period. This significant input of freshwater is necessary for the recharge of surface and subsurface reservoirs for several regions of the world.

Recently, a debate emerged in the scientific community about the impact that climate change could have on TCs in term of path, frequency and strength of these events; some studies suggest a probable poleward propagation of the subtropics in response to warming in the troposphere. Independently of this debate, the goal of our study is to investigate the mid- and long-term impacts of major hurricanes on our landscape and the recovery processes of the environment in their aftermath. It will allow us to better understand what could be the impact on the water cycle of the exposed areas in case of changes in the location, frequency and/or strength of these phenomena. We focus on the major tropical cyclones (H1 to H5 on Saffir-Simpson scale) coming from the Atlantic basin and making their landfall in the southeastern part of the United States. Our research hypothesis is based on the fact that this area is already under periodic severe drought conditions (2000, 2001 and 2007); therefore, a change in water input combined with population growth could distort the natural water cycle by creating a water balance deficit and undermine the regional resiliency to extreme events. To this end, it is imperative to better analyze the role of these events in environmental sustainability. 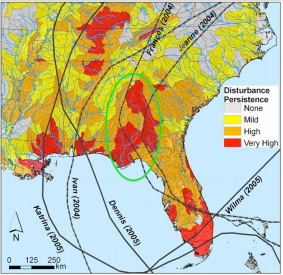 This figure shows the persistence of the vegetation disturbances during the following year of the hurricane Katrina with respect to USGS hydrological units (gauged basins). Note the impacts along the tracks of hurricanes Frances and Jeanne in 2004 (dot-dashed lines) such as in the Apalachicola River (in white).